We all love “Stranger Things,” the 80s sci-fi show that focuses on the strange and pretty insane life of a group of awkward tweens in Hawkins, Indiana.

One of the most lovable things about the show is its cast. One specific cast member, however, should earn more appreciation for their inspiring lifestyle.

Caleb McLaughlin, who plays the only main character of color, deserves better recognition for both his acting abilities and influence outside of the Netflix show.

Although McLaughlin’s character, Lucas Sinclair, should have a better story-line in “Stranger Things,” it’s something many hope to see with the release of season three. The Netflix star also deserves some admiration for his #EmbraceYourFace. It’s an Instagram hashtag McLaughlin has created in order to help boost face and skin confidence in young teens.

Fans can post the hashtag along with a natural photo of themselves, a method McLaughlin has done himself.

Many of the pictures uploaded could be classified as “not Instagram worthy.” This is because of the unrealistic and edited images often seen on the platform that are considered “beautiful.” But what really is Instagram worthy? Most pictures seen online depict an untrue or misrepresented person and lifestyle. A good portion of the pictures uploaded are selected from a larger group of photos that were deemed “not good enough.” It’s something that happens every day. Fellow school-peers and even celebrities post a photo online where they look less like themselves in the real world. This tendency certainly does not help with young people struggling their confidence. However, McLaughlin’s hashtag is one way of boosting people’s self-esteem and showing them that it’s okay to “embrace their flaws.” The hashtag is about posting accurate photos representing real people and enforcing the idea that we don’t always have to look our best. McLaughlin wants followers to post a photo that represents the “real you.”

It’s great when a teen celebrity, who teens can empathize with, helps other young people understand that everyone deals with acne and skin issues. It doesn’t matter if you are or aren’t famous.

Millie Bobby Brown has also recently joined the #EmbraceYourFace movement. In a few videos on her Instagram Story, Brown has told young followers that she is just like any other teenager. But then again, not many other young celebrities have ever gone ahead and joined a social media hashtag for boosting teens’ confidence.

Millie said in one of her Instagram Story videos:

I’m human, I am a teenager, I make mistakes, I get pimples…

Generally, McLaughlin is considered one of the most humble and down to earth members of the cast. He is someone who doesn’t feel inclined to keep a theme or restricted to posting only certain aesthetics. He is simply doing and posting what he wants, and we are totally here for it.

Caleb McLaughlin’s character might not be the ultimate bad-ass like Eleven, but he is just as awesome in real life.

It’s Time to Take Tonya Harding off of Her Pedestal 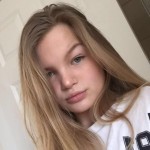 Katie is a thirteen real old student based in England. She is really interested in pop culture and loves to write. Herfavourite subjects are English and Drama and she loves all things 80s and 90s!