Some say the world is an unforgiving place in which no one makes it out alive. It full of famine, malady, and unworldly pain but why do we choose to see the world in this way? Millions of people live a life unfulfilled because of their poor outlook on the universe. Many of them, fall victim to the ideology that in order to be at the peak of your happiness and success – you must subject yourself to obtaining societal possessions (six-figure salary, degrees, etc.), as well as partaking in individualism and practical thinking. But perceiving the world in this way is baffling to the minds of divergent thinkers.

In Unconventional Artists, I will be presenting creatives who have chosen to adopt a new paradigm and approach the world in a way that some may call unorthodox.

In short, we are nonconformists, we are eccentric, we are artistry.

Born in Brooklyn, New York, Drew Ross also known as Theunderdogvision (formerly known as Paigology), is a photographer based in the heart and soul of the N.Y. metropolitan area. Living between Brooklyn and Orlando in her early ages, Ross never imagined that dabbling into arts at the young age of 6 would manifest into what she calls “a beautiful thing”. With the help of her alluring self-portraits, unmistakable short curly-hair and powerful presence on social media, Ross has garnered thousands of people who not only love her work but are healing because of it.

Ross credits her strict upbringing for influencing her experimentation in her seemingly offbeat methods to self-expression stating, “I was going through a really- really rough time trying to find myself while dealing with the pressures of being a teenager and since I grew up with a really strict family, I wasn’t allowed to go anywhere until I turned seventeen.” So with her Nikon Powershot, she got for Christmas at the age of 15, Ross would create captivating self-portraits marked with quotes from literature or her own poetry and then post them on her Instagram page that was at the time called Paigology. From there Drew claims that in these moments of being confined to just a bedroom and backyard, she began to a process of healing. All her life, she lived with the burdens of feeling spurned by family and peers but when she discovered the power that photography had, she found herself saved by the entity of art.

Drew demonstrates that being an artist means exposing your cuts while they’re still bleeding so that those with scars know they aren’t alone in the healing process. It’s that level of vulnerability Drew conveys that is truly the epitome of artistry. It’s graceful, it’s authentic and it provokes people, from all walks of life, to simply open their minds and tell their truth. It’s the willingness to give and give and give even when there’s nothing to take in return. And that is a powerful thing.

Below is a collection of Drew’s photographs and a deeper look into her story.

How would you define your style of photography?

I’ve always been a really big fan of color. I feel like color can tell a story in which words can’t. There’s so many different shades and tones and so many different ways to view something and for that, I just feel like.. I don’t have a style. I’m constantly trying to reinvent myself and be a better person and with that causes new styles to come and go; along with a lot of experimentation. I want to keep people on their toes and always keep them guessing because once you know what to expect from someone the element of fasination vanishes.

I don’t want to simply disappear.

Did you gain your skills from taking classes or are you self-taught?

Does living in New York ever influence your work?

Yes.. When I was younger, I could never understand why people would come here but as I got older and life progressed, I’ve realized that New York is New York and there’s so many things, especially as an artist, to be inspired by.. I feel like, sometimes, if I’m lucky enough and I catch someone off guard, I can see into their soul. I love people who live here because you never know where they are going and there’s always that sense of urgency. When ever I am able to freely take pictures of strangers, it’s so refreshing because there’s innocence in a candid, people are simply existing and that is a beautiful thing.

Why do you keep picking up the camera even when you feel uninspired and unheard?

If there’s any one or anything that inspires me, I would have to say my girlfriend, Toni. She is the most supportive person I’ve ever met in my entire life and even when I feel like sh*t, even when I question if people will care or see my work, even if I think that my photos will never be in art muesums and gallerias, she is the only person who encourage me to keep going. She is the reason I feel like I will amount to something, it will just take time. It’s that kind of trust and unconditional love that I’ve never had before… it keep me going.

If there was no camera and no such thing as photography, what would you do?

I honestly don’t know what I would do. Well, I mean, I would obviously have to keep living but there would always be a void left unfilled.

What can you share to those inspired by your work and to aspiring photographers?

You don’t have to have the fanciest camera in the world. I started out with a little two-hundred dollar powershot that I could probably fit in a coat pocket.. with 12.2 mega pixels and I literally carried it around with me everywhere. You don’t have to take exspensive classes, you just have to be dedicated in making a truth for yourself because you deserve to tell your story and if this is the format for which you want to share your story, then you can’t put down the camera because the pictures aren’t coming out right. Just remember, everything worth having takes time and that when you do make it, please show people that they are beautiful and worth being in front of the camera and having all the focus be on them.

What does photography mean to you?

Everything.. Life. Photography means memories, work and drive and passion and once-in-a-lifetime moments being captured. It’s so amazing because after that moment passes, it’e gone forever. I think capturing life in that split second is something you can’t do in other artforms. What photography means to me is being able to breathe to yourself but having pictures of hundreds or thousands of people sharing the same breath, you catch every perspective in it’s authentic form. And you can’t go back in photoshop, you can’t go back and re-shoot it.. you just can’t manipulate the truth in photography. You get to tell you unwavering version of the story, with all the cuts, bruises and tears. That’s what photography means to me.

In this article:art, artist, artist of color, interview
Up Next:

Meet the Russian Photographer You Should Be Obsessed With 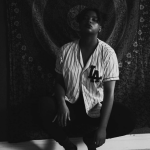 Nmachi Som-Anya is a 17-year-old unconventional artist currently residing in Sacramento, California. Born from Igbo parents, writing has been the concrete to her feet since she was very young. Nmachi finds pleasure in writing poetry, expanding her mind and exploring the world she lives in. You can connect with Nmachi on most social media @ahfrovision