The past two years have been tough for girl-group Fifth Harmony. With a sophomore debut that failed to achieve the type of success it had hoped for, the loss of a trusted bandmate, and extreme rumors that the group was surely splitting up, it is a wonder how the quartet has remained confident and hopeful. Yet as I sit here in the dark of my bedroom at 2 in the morning, headphones in, cranking the band’s latest album, I find all the answers I need to solving the complicated problem that truly is Fifth Harmony: subtract the one, and now there are four voices to divide equally, to measure correctly. Fifth Harmony may have suffered massive blows to their career these past two years, but their self-titled debut proves to listeners that this group isn’t going anywhere; that though they are smaller in size, their voices now carry an even bigger punch.

“When push come to shove, you show me love.”

Perhaps the most recognized song from radio-lovers, Down is a high-strung pop-anthem best suited for college parties and bright beach days. The beat is simple and reminiscent of the group’s best selling hit, Work From Home, but still retains a slight twist to keep listeners interested. The song does have it’s downsides, being a bit too repetitive and dragging on towards the end, but it’s clear to see why Down was chosen as the group’s debut single. Overall, it’s a fun, simple tune that is sure to get stuck in listeners’ heads for days on end.

Every pop album has that one song they could really do without. Lyrically speaking, He Like That is that one song for Fifth Harmony’s self-titled debut. The song is mostly gibberish, with the chorus bouncing from “he like that bom bom bom” to “pumps in the bump”. The song really doesn’t make sense, but perhaps that was Fifth Harmony’s intention in writing the song. Similar to Down, He Like That is yet another simple, fun pop-anthem for the summer. While the lyrics are silly, the song’s beachy melody allows listeners to soak themselves into the music.

“I don’t want no problems, I want power. I’m drivin, you follow.”

Urban Dictionary defines “Sauced up” as “the drunkest, wasted person you see in the bar or party usually after they’ve been getting into grandpa’s cough medicine.” Perhaps not the entire meaning behind Fifth Harmony’s song, but definitely a close enough guess. Sauced Up may be yet another upbeat pop-jam, but what makes the song so interesting is the change in vibes. The very beginning of the song sets listeners up for another adolescent, radio-curated hymn, but once the verse rolls along we realize this definitely isn’t that type of song. While happy and laidback initially, Sauced Up quickly becomes a sexy, powerful anthem about enjoying your youth while it lasts.

We’ve already covered that every pop album has that one song they could do without. Conversely, every album has that one song they couldn’t possibly do without. Make You Mad is that song. The introduction prepares us for a beat yet again similar to the one in Work From Home, but make no mistake: this song is no repeat. Band member Normani Kordei’s sultry voice draws us into a sexy, devious plot-line to make past flames wish they never became anything but a spark. Make You Mad is a smooth, well-produced gem that truly showcases what Fifth Harmony, as a quartet, can really do.

“Yeah, my baby knows that I deliver.”

The release of Reflection was Fifth Harmony’s first major step in solidifying their career as more than just a product pieced together by a cancelled TV show. Perhaps it didn’t sell as well as it could have, but it definitely gave the band songs that would propel them to the charts, like Worth it and Sledgehammer. Nevertheless, the album did have its nostalgic, ballad-esque gems, namely Everlasting Love and Suga Mama. These songs had potential, but never reached that radio-friendly, head-bopping melody that was needed to sell to the general public. Deliver, well…delivers everything that Reflection couldn’t. Jazzy piano chords propel the quartet’s well-trained vocals, with cranking blips reminiscent of Bruno Mars’ That’s What I Like. Dinah Jane’s vocals carry the song, hitting each and every note with a soft, silky brilliance only found in the best R&B songs. Deliver is a nostalgic, retro song that is sure to appeal to not only the younger millennial crowd, but also the older generation that are interested in hearing music other than computer-generated bops.

“If you don’t treat ya mama right, bye-bye.”

Almost the opposite of Sauced Up, Lonely Night is like a roller coaster crawling at a slow, dark pace before diving into a chorus of beachy, vivacious loops. Again focusing on putting disrespectful ex-lovers in their place, the song begins with sharp, almost intimidating snipes from Normani Kordei and Dinah Jane, telling their past flames to “get [their] shit together.” The singer who really makes this song great is Ally Brooke, a woman of short height but soaring vocals. Brooke takes the entire bridge herself, no mercy as she ruthlessly embarks on unthinkable high notes, clever tongue-twisting vowels, and an overall feasible attitude that grabs you by the headphones. In addition, Lonely Night features sporadic, smooth harmonies reminiscent of Destiny Child’s R&B flare.

“You hold my heart at a safer distance.”

Perhaps the best song off the album both lyrically and musically, Don’t Say You Love Me is the softer, more emotional, ballad-esque song off the self-titled debut. Rather than retaining the album’s theme of empowerment and confidence, this song focuses on the fear: a relationship, either romantic or platonic, is at its end, but neither side truly wants to admit it. Instead, the relationship hangs on a loose thread of hope and bluffs, brushing over the truth that things have gone wrong. Don’t Say You Love Me addresses this fear of not wanting to approach the end of a relationship, but accepting that the alternative is far too painful to continue enduring. Moreover, each song on Fifth Harmony showcases the best in each member: Make You Mad gives life to Kordei’s sexy, radiant vocals falling like waves; Deliver finds a home for Jane’s silky yet rough R&B flare. Lonely Night highlights the unbelievable capabilities of Brooke’s previously underrated talent as a vocalist. Don’t Say You Love Me is Jauregui’s song, hands-down. Opening the song with her sultry voice, pouring so much soul and passion into each word like her life depends on it, and breaking every listener’s heart as her voice nearly cracks during the final chorus, begging, “Don’t say you love me, unless you do! Don’t say you love me- don’t say you love me!” In this song, Jauregui proves herself as the most emotional vocalist in Fifth Harmony, and that’s what makes this song so great.

“Open your eyes, I’m more brilliant than you’ll ever be.”

Fifth Harmony make their dubstep debut following the 7/27 era with this innovative, calming song. Angel is definitely not a club song, and it definitely isn’t one you want to hear on the radio, but it’s still a nice, hidden gem in the grand scheme of the album. Skrillex eases the waves of Fifth Harmony’s bouncing vocals into a soft, electric break that really makes this song a great highlight to the end of a long day.

“I can be such a scandal, runnin’ at the mouth, then crying on the bathroom floor.”

For a song so vulnerable, it’s certainly odd to hear a sample from Shaggy’s “It wasn’t me”. Nevertheless, Messy shines a velvety light on our biggest insecurities- the ones we’d rather not admit exist. With lyrics focusing on “no filters” or secrets, Fifth Harmony embrace the biggest downfalls of their personality, not afraid to admit that they can, indeed, be messy. A great song to listen to when you’re facing your mistakes, Messy is a cute ballad for anyone to enjoy.

“We build bridges, not walls” sets the tone for Fifth Harmony’s politically-charged ballad. Certainly taking a dive at Trump’s border wall, Bridges brings together four girls, from four different backgrounds, to promote words of peace and unity. Enough division, enough hate; we know for a fact Fifth Harmony, namely Lauren Jauregui, has spoken out against our president’s divisive, hateful nature. Bridges brings the message home, reminding us that art is perhaps the best platform to fight against injustice. A gorgeous ballad brimming with compassion and courage, Bridges is America’s new “love trumps hate” anthem.

Overall, Fifth Harmony’s self-titled debut is a playground of different genres, a showcasing of four burning voices previously stifled behind a sole star. Fifth Harmony became a concept in late 2016 when their career grew rocky, with many fans and critics alike doubting the group would even renew their contracts following such chaos. Fifth Harmony proved them wrong. Normani Kordei, Lauren Jauregui, Ally Brooke, and Dinah Jane all stand as equal parts of a balanced equation.

In this article:fifth harmony
Up Next: 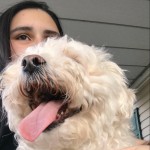 Mikayla is a high school student from New Jersey. She adores reading, writing, Lin-Manuel Miranda, and binge-watching The Office. In her free time, she works for a nonprofit and listens to her favorite bands, Paramore and Daughtry. Oh, and she really loves her dad.

Fifth Harmony Announce a Hiatus to Focus On Solo Careers

Dear Media: Celebrities Have Boundaries, Too