You’ve seen these characters before. They may be that girl in that popular new YA novel, or the lone female character in an action movie. Kick-ass, tough, and witty, the strong female character takes no sh*t from anybody.

In a movie, the only thing that separates a Strong Female Character from a damsel in distress is her ability to throw a punch. She’s usually still a love interest; in fact, her ability to fight often makes her a better prize at the end. You only have to look at the movie posters to see that she’s not intended to be a character who can stand alone. These posters, without saying a word, tell us what the role of women in the movie are. They’re there as supporting roles and as love interests, but not as the main characters themselves. They may be tough and smart, but they lack agency. Their actions do not push the plot forward, because they’re there to be rescued and romanced by the main hero.

A slightly different strong female character has emerged in the world of YA. After Divergent and the Hunger Games came out (and this is not bashing either series- I enjoyed both), characters modeled after Tris and Katniss became popular: tough, kickass girls who save the world. However, these characters usually lack the same depth and complexity. The only aspect of them we ever see is the “strong” side. God forbid these girls ever cry or show emotions. Usually, they show disdain for feminine interests, preferring to hang out with the guys and hone their fighting skills. Usually, they’ll end up with a boyfriend, despite their professed disinterest in romance.

I can count on my fingers the number of times I’ve seen a feminine female hero in a fantasy, dystopia, or sci-fi novel. This is my theory as to why:

In books, movies, and our culture, femininity has become synonymous with weakness. That’s the problem. Women and girls are depicted as passive love interests or as mega-tough Amazons, but we’re never shown as what we actually are: people.

In this article:action movies, books, feminism, movies, women
Up Next:

Colossal: A Monster Movie with a Moral 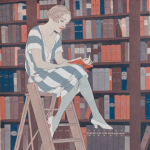 Eve is a sixteen-year-old writer based in the Sunshine State. A proud feminist, she loves talking about politics, women's issues, and LGBT+ issues. When she's not writing articles, she likes writing original stories, playing with her cats, participating in Mock Trial, and reading. In the future, she plans to go to law school to pursue a career as a district attorney.