As my fellow movie junkies probably know, Walt Disney Productions is making a new movie inspired by The Nutcracker, a story written by E.T.A Hoffman and later created into the iconic ballet. The ballet was choreographed by a few different people, but most famously in the United States by The New York City Ballet’s  George Balanchine, who used the music of Pyotr Ilyich Tchaikovsky. Although other small-scale movies based on this unique story have been produced, The Nutcracker and The Four Realms will by far have the most viewership because of the company’s name recognition and the fact that the trailer’s been widely advertised since last December. The tale of The Nutcracker holds a special place in my heart because I performed in the ballet throughout my childhood and adolescence. Disney has a way of taking marvellous stories and making them completely different, such as in the case of The Little Mermaid, where they took a defeated woman who loses her chance at a human body and true love and created a more bubbly female lead who gets her happy ending. This tactic was used with many other Disney movies, and it makes sense- it allows them to avoid facing young viewers with troubling concepts, such as death or other heavy topics. In fact, the original telling of the story of the Nutcracker was different from the holiday classic so many enjoy today- it was changed because of some mature content. In the case of Disney’s retelling, however, it does not seem to be their goal to edit out anything that would be inappropriate. I’m not sure what their desire to change the story is caused by, because in my opinion this exquisite tale couldn’t get any better and its plot line shouldn’t be touched. My concern toward the movie is that it will portray The Nutcracker in a way that would insult the holiday favorite.

The telling of The Nutcracker as known by many people today is a story about a young girl named Clara (or Marie, in some cases) who is given a nutcracker doll at her family’s Christmas celebration by her godfather, Drosselmeier. He also introduces her to his nephew, and throughout the night, two of them dance and flirt innocently. Before Drosselmeier leaves her house that night, he casts a magical spell which makes everything, from the nutcracker to the rats scurrying inside the walls, in Clara’s house to come to life. When the now life-sized nutcracker goes into battle with the King Rat, Clara helps him defeat the enemy by throwing her shoe at the evil mouse and distracting him long enough that the nutcracker could kill him. In the midst of her fear, Clara passes out on her bed and the battle ends with the death of the villain. Clara awakens soon after to find her nutcracker has turned into Drosselmeier’s nephew, now a prince, and they travel through the snow (because what good Christmas story doesn’t have snow?) into the Land of the Sweets. There, they meet the Sugar Plum Fairy who decrees the groups of candy-inspired characters to entertain the two saviors with marvelous dance performances. After the dancing sweets all show off their talents, Clara wakes up to find it was all a dream, carefully constructed by the supernatural talents of her godfather. The story ends with Clara’s parents finding her on their living room couch, clutching her beloved Nutcracker, unbeknownst to the journey her godfather had just sent her on.

The first thirty seconds of the movie’s trailer makes it very clear that they’ve significantly changed the story’s idea, plotline, and characters. Clara is one character who was changed; her prince appears to have been completely cut out. Played by the Twilight child actress Mackenzie Foy, Clara doesn’t even receive a Nutcracker doll as a gift from her godfather, played by Morgan Freeman. Her dream is changed when she is given a key, which leads her into another universe called “The Four Realms,” instead of her strong nutcracker soldier. The Four Realms, an addition to the previous story, is made up of the Land of Snowflakes, Flowers, Sweets, and an unnamed fourth realm where only evil occurs. The new villain,

Mother Ginger in The Nutcracker and The Four Realms. Credit: Geek Tyrant

who takes the place of the rat king, is called Mother Ginger, which oddly enough is the same name as a much more amusing character in the ballet production. The Sugar Plum Fairy, played by Keira Knightly, tells Clara that it’s her job to help end the villainous actions of Mother Ginger, with the help of some random teenage boy that seems to only serve a purpose as Clara’s assistant in this rendition. I have to admit, it’s pretty neat to see Clara fighting her own battles instead of letting a man take them on for her, but in the original version Clara didn’t come with her own sword, and the Nutcracker did- that’s why he was the one participating in most of the battle. Clara made do with what she had, i.e. her shoe, which helped them win and proved she could still be pretty bad*** without weaponry. I don’t see why the filmmakers felt anything about this production needed to be changed for it to be successful in the cinemas. 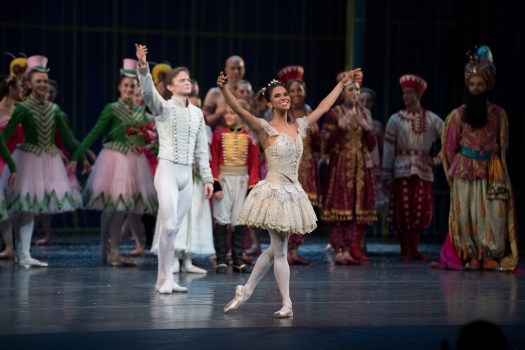 Copeland as The Sugar Plum Fairy in The Nutcracker with ABT. Credit: Press Telegram

One detail of the film is related to the world of ballet, and that detail is Misty Copeland, a dance well known for being the first African-American principal ballerina in the American Ballet Theatre (ABT). In the film adaption, she plays the role of “Ballerina,” and I can’t say I’m anything short of shocked that she’s in it. Someone who is a major role model for young ballerinas, someone who was honored with the role of the Sugar Plum Fairy in ABT’s narrative, would be willing to perform in a movie who’s interpretation is this far from the original version? In my opinion, it is an odd choice for her to choose to be in the movie. She wants to bring ballet into the eyes of children through a film and I respect her choice but I still feel that children should be exposed to classical ballet the way it was meant to be seen- on a stage. Overall, I think that based on the trailer, this movie will not amount to be half as wonderful as the story that I, and many others like myself, grew up with. The prospect of many parents choosing to bring their children to their local movie theaters to see a cinematic version of the tale instead of exposing them to the story through ballet in a performance arts theatre disappoints me. I just hope that The Nutcracker and the Four Realms will never outshine the classic story of The Nutcracker.

The Nutcracker and the Four Realms will be in theaters November 2nd, 2018.

‘A Christmas Prince’ Sequel is Coming to Netflix This November