On this episode of Underrated Artists, I present to you: Willow Smith. As the daughter of power couple Will and Jada Pinkett Smith, Willow has a last name that might ring a bell or two for you, but trust me, it’s not the only thing that has forged her identity in show business. At just the age of 18, she has already made a name for herself and has countless achievements on her record. Although she became famous for her instant hit ”Whip My Hair” back in 2010, the young teen amassed success after success and achieved multiple exploits. From protesting about political issues to writing novels and albums, the teen star is definitely just getting started. So on that note, here are all the reasons why Willow Smith is an icon of her time:

She is a Chanel brand ambassador, a social media star with 3.7 million followers on Instagram and is a STEM enthusiast.

”She is a self-proclaimed STEM (science, technology, engineering, and math) freak, with her sights set squarely on deepening connections in the science community and maybe even attending the Massachusetts Institute of Technology (MIT) one day.” – Teen Vogue, on Willow Smith

Oh yeah, she has an accomplished singing career (check out her last album The 1st!) but she also dances, acts, owns her own production company MSFTS Production and is currently working on an animated TV series, based on a novel which she wrote – I got tired just by writing all of this!

2. An amazing take on fashion

Along with her brother, Jaden, Willow has undeniably made it clear that she wasn’t set to follow the “norms” of the fashion industry. Willow has been pushing these boundaries for years and created her very own fashion world, where clothes are not just pieces of fabric but rather a statement: clothes aren’t meant for just one gender or another. No wonder that the British Fashion Council awarded her New Fashion Icon in 2016!

Naturally, with Willow as the daughter of two major Hollywood stars, fame is inevitable. After hitting it big with ”Whip My Hair” at the tender age of 10, the young artist, (as grateful as she is regarding her upbringing) shed some truth on the not-so-glamorous side of being famous. A few months ago, Speaking on Red Table Talk, the teenager recalled: “I would have to say I honestly feel like I lost my sanity at one point. It was after that whole Whip My Hair thing, and I had just stopped doing singing lessons and I was kind of just in this gray area of ‘Who am I? Do I have a purpose? Is there anything I can do besides this?”, she added, “After the tour and the promotion and all of that … they wanted me to finish my album. And I was like, ‘I’m not gonna do that.’ […] I was just plunged into this black hole and I was, like, cutting myself and doing crazy things… I honestly felt like I was experiencing so much emotional pain but my physical circumstances weren’t reflecting that.”

She is honest about her experiences and the struggles she faces, and it’s an honesty that the pop culture massively lacks. On numerous occasions, Willow reminded her supporters that she hopes that by opening up about her own experiences she will help them to be both more sympathetic to their celebrity idols, but also not be embarrassed to speak up if they are suffering too.

4. She uses her fame for social good

On top of being an accomplished artist, she doesn’t miss an occasion to protest about issues she’s highly passionate about. In 2016, at only 16, Willow and her brother Jaden marched in solidarity in the ongoing Dakota Access Pipeline protests. This pipeline affected the safety of the water supply to the inhabitants of one of the last remaining Native American tribes living in this area.

5. She’s the Future with a capital F

As Willow Smith underlined in one of her albums, ”Classification and organization is ruining the minds of our generation,” and she undeniably embodies that notion. She often speaks about how society is putting this generation in a box and is, therefore, hindering its creativity and free will. Willow is an uprising Icon And I can’t wait to see what else the young Smith gets up to in the future. We’re here for this Willow!

‘Thank U, Next:’ The Most Iconic Music Video of the Year

Chance the Rapper Plans to Release a New Movie Musical 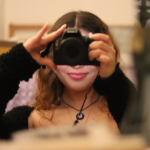 i have more issues than vogue