Following the election, I found myself nestling most of my ire and emotions into my chest. I didn’t write much about it, particularly in poetry, mostly because I didn’t want to be met with the harsh revelation of the country’s given state. Now, a few months later, I found myself combing through what was truly needing to claw out of me. And it has taught me to not restrain myself or my words.

there is a dull finish to

to the curt tendency of our phrases

we dig our feet into deep depressions

the soil rich and padded by those whose

we no longer cup golden mornings in our palms

and fold them into the crinkles of our grins

plunging our fists into the air like we’re lady liberty

no, our lips are no longer swollen in chortles

of gondolas and salt

we are trudging along a trail of mud-caked fears

along sanctions disguised as a sullen man

his wiry face resembles that of one who

the television shudders with the word ‘President’

but it is something foreign in my mouth

into the tissue of bone marrow

by hurried “i love you’s” and prayers that

our autonomy will remain intact

we don’t turn on the television anymore

recoil at the word ‘President’

we light a candle amid his declarations of privilege

declarations that scald the skin akin to my own

the candle burns out

In this article:2016 election, poetry
Up Next:

I Was Far Too Young To Be a Woman

A Poem For the Tired Arms Holding Picket Signs 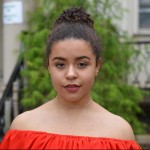 Brittany Adames is a seventeen-year-old Dominican-American writer. She spends most of her time writing poetry or leaving short stories half-finished.