Yami-Kawaii Is Where Fashion Meets Depression and Suicide

When it comes to asking people what they think of upon hearing the word “Japan,” surely most of them would include one of the following: technology; sushi; Tokyo, the world’s largest urban area; Haruki Murakami; anime, with Studio Ghibli as the most famous Japanese animation film studio; cherry blossoms and how everyone is waiting for photos of their blossoming, which starts in January in Okinawa, typically reaching Kyoto and Tokyo at the end of March or the beginning of April.

While none of the answers listed above is technically wrong, I believe that outsiders immediately think of the word ‘kawaii’ and its aesthetic as the defining feature of the Japanese culture. Made up of two characters, the word literally means “ability to be loved.” However, there is another topic that is closely linked with Japan that people are not so quick to approach: the issue of mental health and suicide and the stigma surrounding it. This is where the Yami-Kawaii subculture interferes with Japan’s silence over the matter. The purpose of this article is to discuss the important role that this new aesthetic bears in addressing Japan’s biggest social issue, while taking into account the nature and characteristics of mental‐health‐related stigma among Japanese people.

Yami-Kawaii (‘yami’ meaning sick or alluding to the hospital) is a ‘sick-cute’ aesthetic that has been bubbling out of Tokyo’s streets and manifests through accessories such as fake guns, syringes, gas masks, pills, bandages and plasters. It’s a mash-up of frills, hearts and pretty fonts spelling out words like ‘I Want to Die’ or ‘Fuck Everybody Else.’

Yami-Kawaii provides a unique duality between pastels and dark elements, thus suggesting the idea of sickness inside the cuteness. This mismatch between how cute it looks and the underlying meaning and the anti-social words are what makes it grow in popularity among young people. The accessories used to complete the looks, such as the feverishly white skin and red puffy eyes, are all elements that direct the viewers to the idea that the wearer is fragile, weak and emotionally-wounded.

First of all, let us try to understand the reasons why Japan has one of the top suicide rates in the world. By way of introduction, Japan is a collectivist country, therefore the ideal-Japanese person is a functional member of society; someone who needs additional help is automatically stigmatized. A person with mental issues is not seen as socially-valuable, and there are not many opportunities for them to get help, get a job, or do anything meaningful with their lives.

In a study carried out by a few professors from the Japanese Society of Psychiatry and Neurology, the general perceptions that the Japanese hold were analyzed, and these are some of the findings:

“Regarding knowledge about mental illness, reviewed studies showed that in the Japanese general population, few people think that people can recover from mental disorders. Psychosocial factors, including weakness of personality, are often considered the cause of mental illness, rather than biological factors.

The same study goes on to explain that “in addition, the majority of the general public in Japan keep a greater social distance from individuals with mental illness, especially in close personal relationships. (…) Mental‐health‐related stigma has played an important role as a barrier to development of and access to mental health services in Japan. For example, almost two‐thirds of individuals with mental illness never seek help from a health professional because of stigma.

“In addition, mental health services in Japan have been internationally criticized due to the excessive number of inpatients, insufficient community resources, and infringement of human rights of individuals with mental illness. Thus, tackling mental‐health‐related stigma has been identified as extremely important to improving services for (and hence the lives of) individuals with mental health problems in every country, including Japan.”

Moreover, this stigmatizing attitude is found even among medical students and professionals; the vast majority (82 percent) of the respondents were of the opinion that people with schizophrenia are frightening due to the unpredictability of their behavior. In Japan, when talking about who is to blame for the suicide rate, numerous people from the older generations stand by the opinion that the person who commits suicide is in the wrong, explaining that it is a weakness (therefore, confirming the views expressed in the study mentioned above). It is true that younger people are more understanding; nevertheless, it is still not a common thing to talk openly about these struggles.

This is where the pioneer of the Yami-Kawaii movement, the artist named Bisuko Ezaki, comes in. He confessed that when he was living with his grandparents, they were using violent language toward him on a daily basis. It was during that time that he started drawing Menhera-chan, as a way of escaping reality.

When asked about the role of the movement and about his ambition, he responded that there is always a demand for the things people are avoiding. In a society like the one existing in Japan, where conformity is expected, putting yourself on display in this manner is shocking and makes people uncomfortable, but according to him, it is specifically why people are drawn to it.

A lot of young people relate to the feelings that he expresses through his character, and they start adopting the style, connecting with the message behind it, in a silent form of protest that is trying to raise awareness regarding this growing problem within the culture.

Bisuko wants to change the negative image of mental illnesses. For that, he is using the negative feelings that everybody can relate to or experiences at some point, such as sadness or darkness, and makes these feelings cute.

He turns them into a way of expressing himself and allowing his thoughts to be seen by others, through the clothes he is wearing, in order to bridge the existing gaps between people and facilitate communication.

The Yami-Kawaii movement bears an essential importance in breaking Japan’s silence over suicide and mental illness. At the core of the entire movement seems to be the suggestion of love, as odd as it may seem. By putting themselves on display as being weak and fragile and by allowing others to read their innermost thoughts, according to the messages written on their clothes, those who are adopting the Yami-Kawaii style are making a statement.

In a society as rigid as the Japanese one — where talking about depression and mental illness is still seen as taboo — asking for love is expressed in a subtle way. Asking for love, for understanding, for gentleness — when you have a hard time practicing self-love — is very brave. Embracing your darkness as your cuteness and living in that truth is offering you the refuge that you need as an individual, as you are drawing everyone’s eyes to you, making people realize that the pinks and pastels, the ruffles, the cute elements and the sweet fashion are “tainted” with dark messages.

Finally, the realization sinks in: the people everyone thinks only “exist” on the internet — on forums, where they send anonymous messages talking about ending their life — exist in real life, among them, creating art and using fashion in order to deal with the way society works, which, ultimately, allows for a new sense of freedom in the process.

Photo courtesy of BoF – The Business of Fashion.

Author
Andra V
21 years-old. Passionate about music& literature. In love with the sea. I write as I go, about people, for people, in the name of the things I believe in. 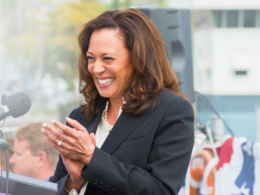