When Hatchie jumps in a Zoom meeting with Affinity Magazine, it’s been exactly one month since her ‘Giving The World Away’ tour kicked off in Washington, D.C., which marked her first album-supporting show since the beginning of the COVID-19 pandemic. She excitedly commented on feeling the crowd’s energetic response grow with each concert, partially thanks to her latest project including more danceable tracks, and how isolation took a toll on her, artistically speaking: “It was really rough. The first year wasn’t so bad because we were working on the album, so it felt like we were where we needed to be, ’cause we had just toured for two years straight. 2021 was definitely harder for me, mentally — we’d already spent a year inside, I was reaching the end of my road. We finished the album at the end of 2020, so we were sitting on it for a full 18 months, it was crazy.”

The Australian singer entered the scene as a solo artist back in 2017 with the release of her debut single ‘Try,’ and by mid-2019 she was quickly gaining spikes of attention by critics and fans alike thanks to the release of her first album ‘Keepsake,’ a dreamy yet striking piece that briefly let the world into her heart and her mind. Before she was widely known as Hatchie, that was just the nickname Harriette Pilbeam’s loved ones chose for her. She has gone on record to say that she decided to take on a solo musical project during a period of her life when she was largely dissatisfied and fully delved into writing, as a result. While her rise in popularity was fast, things soured for her again during lockdown.

Though she first had to face some personal troublesome moments, she was still able to pull through and release her sophomore album to rave reviews and even more international recognition. “I guess that’s the beauty of being creative. It can be frustrating, because I find that it can be hard to write a song when you’re really happy,” Hatchie confessed, when asked about whether her lowest moments serve for her best beginnings. “I think my best and my most emotional music comes when I’m sad. But hopefully I can get better at writing when I’m happy because I don’t wanna go through it anymore.”

One of the reasons why Giving The World Away has resonated with audiences is the connection she has managed to build through opening up. The record is filled with valleys of emotion, such as “Don’t Leave Me In The Rain” — a piece about the downsides of depending on the opinions of loved ones and those you look up to. “I think it’s so good to have a community like that, but I felt like I was relying too much on it to the point that I was getting really anxious about making decisions by myself,” she said. “I wanted to write a song about that feeling, which is something that I’ve had since I was a kid and I’m really trying to break out of. I just wanted to put those feelings into a song so I could move on. And I feel like I did that.”

Oftentimes, Hatchie can be heard singing directly to somebody: on “Take My Hand,” she repeats “You don’t have to change.” These letters with no explicit recipient certainly give the project a cathartic feel: “‘Take My Hand’ is definitely directed at myself. I wanted to write a song that was what I wish someone had said to me when I was a teenager, ‘cause I felt like I didn’t have someone to lean on when talking about my self-esteem or my body issues,” she explains. “I wrote ‘Giving The World Away’ and ‘Til We Run Out of Air’ to be ambiguous, ‘cause they talk about a lot of things that I’ve gone through but also that my friends have gone through, so I wanted to address them from an outsiders’ perspective.”

Ultimately, while she acknowledges how scary it is for everyone to read and analyze her thoughts, Hatchie recognizes that the entire process has been therapeutic: “It was really nice to acknowledge those things to myself that had been floating around in my head for years but I hadn’t properly addressed.”

Giving The World Away is not only much more complex and multi-dimensional than Hatchie previous work on the lyrical aspect, but also on its conceptualization and production. The singer worked closely during the entire creative process with Jorge Elbrecht, who previously worked with Sky Ferreira and Japanese Breakfast and Joe Agius, whom she got married to last year, to produce a piece of art in which the world-building is refined and detail-oriented. “[I wanted to] make this one a lot more enhanced, just to create a specific world rather than write some songs and put them out and put a picture with them. We planned out a color scheme, the fonts and the artwork a little more this time around, to make it more cohesive, and mature, and glossy,” she says, confirming the intention.

The contrast between this project and Hatchie’s first two is noticeable, to the point that she almost considers this moment of her career a re-start. She shared, “Whenever I listen back to my old stuff, it sounds so simple. [With] these ones, I really wanted to get into the nitty-gritty details and make every part of the songs sound different and experiment a lot.”

Pop music in the 2020s has been dominated by a revival of the ’80s groove and the ’00s angst — and it seems like bringing back the ’90s hasn’t been a priority, almost as if it had been skipped. Hatchie’s latest project draws from that era, with ethereal synths, brazen guitars and wondrous climaxes. “I was born in 1993 and had three older siblings so they were very influential on my music taste. I listened to The Cardigans, Shania Twain, The Cranberries,” she commented, embracing these inspirations. “A lot of the ‘80s music is so dramatic and intense in a really beautiful way, and I’ve definitely taken up from that. But in the ‘90s music kinda chilled out, and there were prettier elements that I really like.”

In honor of Jennifer Paige’s 1998 classic “Crush,” Hatchie released a tension-laden reimagination of the track on streaming last year.  “It’s a very lighthearted song, but it was fun to make it really serious,” said Hatchie. This cover came in the context of the artist posting other covers on her Patreon page, which she launched in late 2020, along with earlier, unfinished versions of songs in her catalogue. “There are some that I definitely won’t share because I don’t want anyone to hear them. But I think it’s just important to be vulnerable with your fans,” she responded when prompted about why she chooses to share this particular content with fans. “It’s nice that it’s so contained to a certain number of people, I don’t think I’d put them online for everyone to hear. That’s why Patreon is so good — it’s locked to people who you trust. I know they’re not gonna judge me, even though there are some that I’m a bit embarrassed by. I think it’s a nice way to connect.”

While Giving The World Away has been a notable success for Hatchie, the road has not been without self-doubt. On “Quicksand,” the second single on the album, she sings: “I’m trying but what’s the use in trying / When all I’m left with is disillusionment.” Ironically, she initially feared that releasing this pop-heavier song could alienate her fanbase, which had grown to love her unique take on shoegaze, but the fact that it only expanded her reach may be a strong indicator of the power of instinct.

In response to whether she has learned to fully trust her gut during this process, Hatchie says: “It’s definitely still a bit of a challenge, but I’m getting there and remembering that there’s a reason why I’ve gotten this far, and I should just keep doing what I’m doing. It’s been really rewarding seeing this album getting more attention than the last one and having more people at the shows. It’s been a good reminder that it’s okay to change.”

You can buy and listen to Giving The World Away on all platforms. 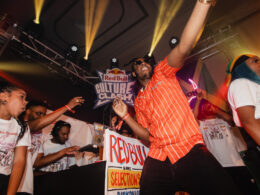