Aug. 31, 2018 the world celebrated the life of Aretha Franklin by attending her funeral and talking about the great life she lived. The queen of soul, the great icon died at the age of 76 on August 16 this year due to her pancreatic tumor. Many celebrities such Ron Isley, Chaka Khan, Yolanda Adams and Jennifer Holliday showed up to show their love, and among those was the incredible pop star singer Ariana Grande who performed the Queen of Soul’s iconic song “(You Make Me Feel Like) A Natural Woman” with her incredible vocals. With all this going on the whole world wanted to stop and pay more attention to Ariana’s choice of clothing that was a short black dress.

Instead of paying attention to the length of her dress, everyone should have been paying attention to her tribute, to the art, the performance. I came across a tweet that was talking about “why are you tempting the men in the room with your short dress?” this right here triggered something within me. Why must she have to dress to cover herself up from the men? Ariana is known for wearing short dresses, its her style, she did not choose that dress to make this day about her, she just chose it.

Many others have been saying that the short dress is “disrespectful” and not “appropriate” but that is taking away the importance of the day. This is Aretha’s funeral, this is the day we are celebrating her life, not worrying about someone else choice of clothing. Talking about the choice of someones clothing is beating the purpose of their performance or their words. We should talk about the sexualization they are putting on her and why a group of men think it is okay to do that.

Everyone should realize that Aretha adored Ariana, Ariana did a great job during that performance. That is what we should be talking about. Talking about how amazing her vocals were and how she stomped the house down. How the service was about honoring the queen of soul and not about the length of a dress. How her tribute was something Aretha’s family enjoyed to watch and hear. How amazing Ariana must have felt to be there and perform for someone she looked up to and loved. Ariana showed up and did what she had to do and that is what she did, she was not worried about the length of her dress or what others will say about it, she was busy with rocking this tribute and making it amazing for the Queen of Soul.

Ariana Grande Is More Than A Powerhouse Vocalist

Ananya Birla Does It All: from International Pop-Star to Mental Health Advocate 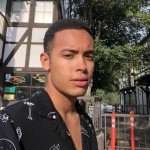 Hi! wow welcome! I'm an 18 yr old boy that currently lives in Las Vegas, Nevada, sin city. The city that never sleeps but we all eventually sleep. I'm currently about to hit my freshman year of college with journalism as my major. I currently have three siblings, the oldest of four. I'm also a lifeguard for one of the casinos here, how cool is that and I love the color yellow!