Yayoi Kusama and Her Awesome Obsession with Dots
Advertisement

Kusama’s art is conventional in style, greeting us with amorphous, repetitive patterns and colorful layouts. Her most recent installation, ‘Infinity Mirrors,’ is a series of six mirrored rooms that include many of her key works from her 65-year career as an artist. Encouraged by Georgia O’ Keefe, she moved to New York City from Japan, in which she became the leader of New York’s avant-garde movement, and became known for her trademark polka-dots. Kusama’s work has stretched far into many art movements that involve pop art and minimalism. Her work has been widely featured in well-known museums like the Museum of Modern Art in Oxford, England, and the Center for International Contemporary Arts in New York. I wanted to examine the single dot that was my own life.

Yayoi Kusama’s artworks are motifs of her childhood, in which she experienced hallucinations of her surroundings covered in repetitive, dotted patterns. Her ‘Infinity Net’ series serves to be a visual representation of her early hallucinations, and has been established as her most celebrated series.

In her autobiography, ‘Infinity Net,’ Kusama writes about many moments in which her hallucinations consumed her. When these hallucinations became prominent, Kusama would get home as soon as possible to paint what she would see.

One day, I suddenly looked up to find that each and every violet had its own individual, human-like facial expression and to my astonishment they were all talking to me.

It is impossible to separate Yayoi Kusama’s art from her mental health. Kusama described her dots as something that helps wipe out her anxieties through repetition. Her work has proven to be a process of attending to her mental health problems, including O.C.D., and “depersonalization.”

Kusama has spent her years indulged in her art, and considers her art to be a form of medicine. From repetitive and colorful polka-dots, to reflecting balls, Kusama carries a message of self-awareness in everything she creates.

In an interview with Grady T. Turner, she speaks openly about the relationship between her art and mental health:

Grady Turner: There has been so much interest in your life story as a result of your retrospective at the Museum of Modern Art. Do you ever fear people may be interested in your biography at the expense of your art?

Yayoi Kusama: No, I have no such fear. My artwork is an expression of my life, particularly of my mental disease.

Grady Turner: You say your art is an expression of your mental illness. How so?

Yayoi Kusama: My art originates from hallucinations only I can see. I translate the hallucinations and obsessional images that plague me into sculptures and paintings. All my works in pastels are the products of obsessional neurosis and are therefore inextricably connected to my disease. I create pieces even when I don’t see hallucinations, though.

I will continue to create artwork as long as my passion keeps me doing so. I am deeply moved that so many people have been my fans. I have been grappling with art as a therapy for my disease, but I suppose I would not be able to know how people would evaluate my art until after I die. I create art for the healing of all mankind.

Art Through Texting — Get Your Art on Demand

A Crowd-Sourced Sketchbook Library Open To All in Brooklyn, NY 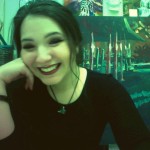