In the Wake of Caroline Flack's Death, Here's a Push to #BeKind 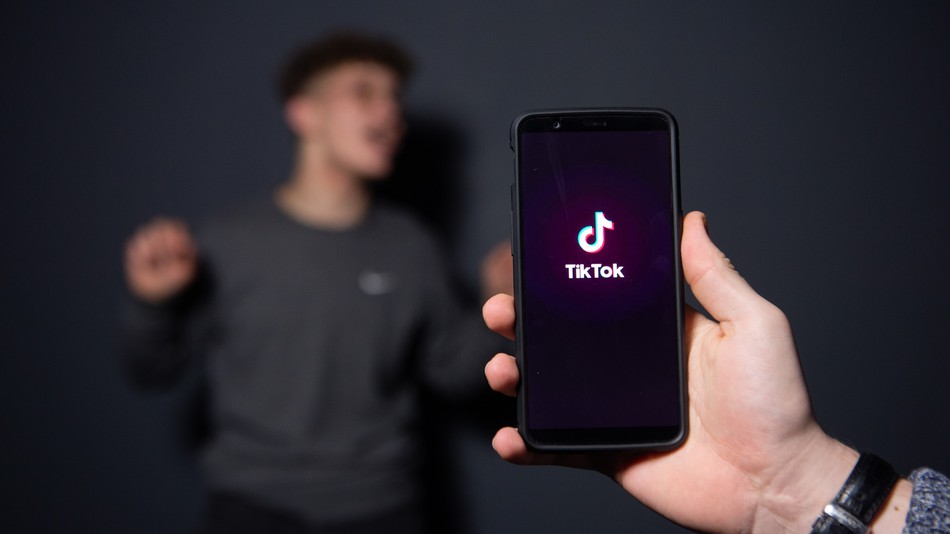 TikTok is a popular app amongst young people around the world (you can read my in-depth story about its misuse of their data here). There is a common misconception that the app is exclusively used for lip syncing and dancing, while that could not be further from the truth. Dancing, lip syncing, original comedy, music, acting, vlogs and art are all found on the app – but just as popular of these forms of content, is the political aspect to TikTok.

Young people scrolling through TikTok are likely confronting political content, even when they least expect it. TikTok currently has over 1.5 billion users, making it the most downloaded app from the Appstore in the world, with 60% of its monthly users in the U.S. being 16 to 24-year-olds. Amongst this demographic, political education, discourse and even campaigns are exceptionally prevalent.

TikTokers are using their platforms to educate their peers. Creators will often use trends on the app to tell political and news stories, sometimes utilizing the element of surprise. One popular TikTok was made by a 17-year-old TikToker Jake Aguero, who used the “this person is thinking of you” format with YNWMelly’s song “223s” to spread information about the detention of Uighers in China, which is often ignored. Another TikToker, Ziad Ahmed (Yale student, the CEO of JUV Consulting and a highly awarded activist), uses trends to create content that encourages young people to research, educate themselves and not be exclusively influenced by older generations. The accessibility of TikTok allows young people to inform and connect with each other, in ways that are passionate and relatable.

The app is also used for debates. Conservative teenagers and Progressive teenagers (there appear to be very few Liberal teenagers on TikTok) can be seen debating, discussing and mocking each other through what are called “duets” (a split-screen effect). One example of this was made by a 15-year-old TikToker named Nate, who made a video arguing with a popular Conservative teenager about the US involvement in Iran. This demonstrates that the political divide in America spans generations, and also the vast political activity occurring without guidance or adult influence. According to 2018 Pew data, 70% of Gen Zers believe that the government is not doing enough, which is more than any other generation, including millennials. While there are clear and ongoing disputes across the app, these debates demonstrate a consistent generational frustration with the current state of the world.

Image via @Jakevpd on TikTok

TikTok is a way for people to express themselves, and young people are using this to discuss their concern with world issues. According to the American Psychological Society, 68% of members of Gen Z feel “very or somewhat significantly stressed about [the United States’] future.” Teenagers on the app are blending comedy and concern. An incredibly widespread trend on the app is the “Mike Pence Summer Camp” format. Young people are sharing what President Trump’s impeachment would mean for them, making light of Mike Pence’s support of conversion therapy. Others are joking about the WWIII “draft,” often concluding the video with text flashing something such as, “Okay but I’m actually scared lol.” There are also videos made by Iranian-American teens making jokes about seeing their family, and other videos by teens outside of the US pointing out how terrifying the US’ international policy is. Gen Z humor is confusing and often nihilist, so in a world where they have been bombarded with online content from an early age, TikTok is sometimes seen as the easiest coping mechanism. William Mercado, a writer for  Medium wrote, “The kids of Gen Z are the best absurdists since Camus.” *(There will not be examples of either of these videos included in the piece, as they can easily and understandably be seen as being made in poor taste.) 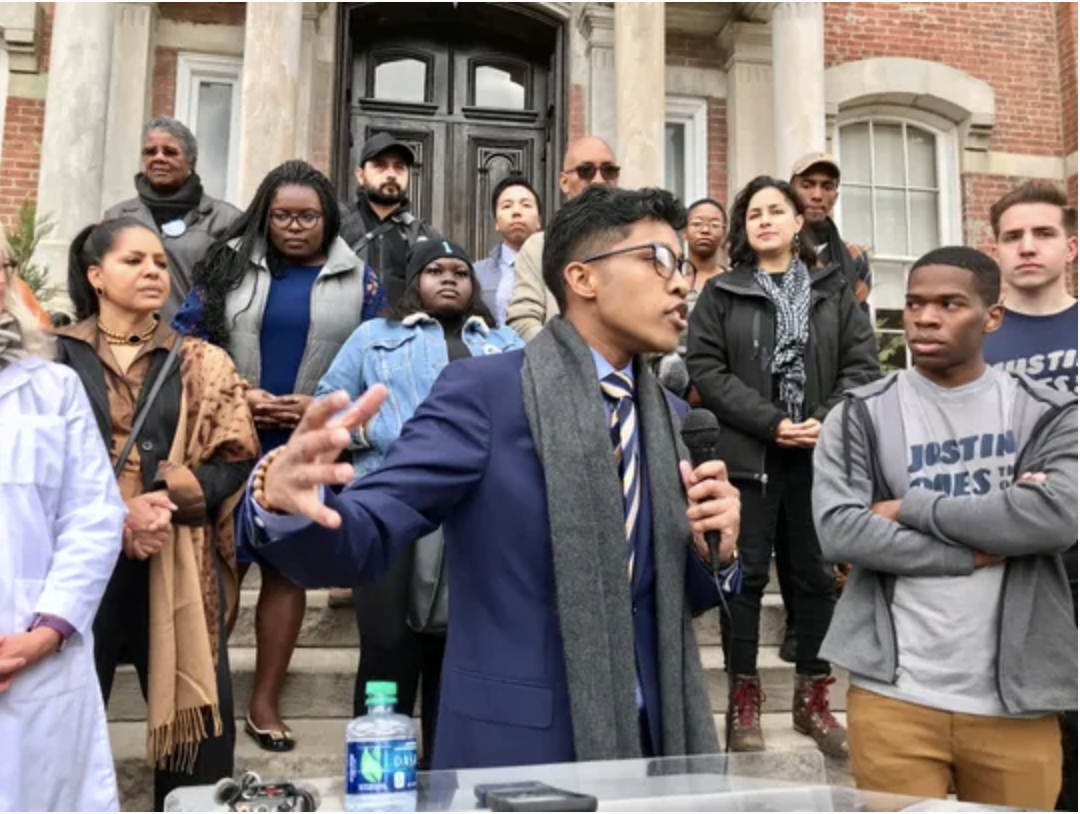 Young politicians are using TikTok to campaign. They use the app to connect with constituents and people around the world. One of the most famous political TikTokers is Candaian politician and leader of the New Democratic Party, Jagmeet Singh. His profile has over 1 million likes, and hundreds of thousands of followers, as he uses trends to describe himself and his campaign. Polling from the Angus Reid Institute found him to be the most popular federal political leader in Canada, with young women aged 18-34 most commonly backing the NDP. Smaller political campaigns in the US use TikTok to grow grassroots support, most commonly amongst Progressives. One example of this is a supporter made video for Justin Jones, an activist running for Congress to represent Tennessee’s 5th congressional district (TN-05). Supporters from his campaign use TikTok to invigorate and grow his following. He describes his campaign as a “grassroots campaign fighting for working people across Middle Tennessee,” with “grassroots, people-powered organizing.” There are multiple politicians using TikTok to promote themselves, and they are primarily campaigns focused on working with young voters.  The younger demographic in America is typically ignored during elections, despite the fact millennials, Gen X and Gen Z greatly outnumber every other voting base in America, according to Pew Research Center. Analysts Richard Fry and Anthony Cilluffo suggest that the higher stakes and diverse selection of candidates lead to a bigger turnout from this younger age bracket in recent elections. By connecting with younger voters on TikTok, these campaigns are encouraging a somewhat neglected base that has proven to alter elections when they are energized. It is likely that in coming years more mainstream political parties and campaigns will begin to utilize the app, similar to the way President Barack Obama was the first politician to fully exercise an online campaign.

Here's what NDP Leader Jagmeet Singh had to say about his viral TikTok and how the campaign came up with the idea. #cdnpoli #elxn43 pic.twitter.com/7Ler2fUy3f

One of the most common examples of political content, that became one of the most popular videos on the entire app, is a video of a creator named Eveline kicking their legs and shaking a bottle of some sort, chanting, “DEMOCRATS! Please don’t make me vote for Joe Biden! Please don’t make me vote for Joe Biden! Please don’t make me vote for Joe Biden! I don’t wanna have to vote for Joe Biden!” This video has gained over 1.7 million views, and created a phrase that can be found throughout other political video’s comment sections. The rapid growth of this video demonstrates 2020 campaigning trends. There is widespread lack of Joe Biden popularity across the app, amongst young people. This is consistent, as according to New York Times and Siena polling, only 2% of 18- to 29-year-olds and 5% of people under 50 in Iowa support Joe Biden. The comment sections and videos found across the app reveal the popularity of candidates such as Andrew Yang and Bernie Sanders, as well as Donald Trump. Another form of commonly used TikTok, is when creators use the “greenscreen” mode and present photos of presidential candidates at a young age. The comments are filled with young people arguing and discussing the campaigns, beyond the comments about the appearances of the candidates. The most popular comments that can be found praise Andrew Yang for both his goth attire and his current policies, as well as comments talking about Senator Bernie Sanders’ Civil Rights activism and “Bernie 2020 🇺🇸.” A great deal of the other comments discuss young Biden’s appearance, but lament his current stances and campaign. Young people on TikTok are frustrated and seeking radical change, across the aisle and at almost every level of government.

Despite the fact it bans political ads, is monitored by the Chinese government and attempts to suppress political content, TikTok is a goldmine of platforms that are important to young people. It demonstrates the engagement with the political process currently occurring throughout Gen Z. It’s a place that popularized and served as the origin for “okay boomer,” it demonstrates patterns and it is a way for politically-minded individuals and organizations to connect. The political power on the app essentially disproves the notion that young people aren’t aware of what is happening in the world – they’re just processing it differently. 59% of people between the ages of 13-21 use social media as their number one news source, according to Business Insider polling. Members of older generations claiming that young people aren’t aware of politics, just aren’t looking in the right place.