Embracing Science in the Age of Trump
Advertisement

In the months since President Trump has taken office, policies and opinions regarding science have infiltrated the media. Whether it’s coverage of the various climate and science marches across the world, misleading statements Trump makes about energy, or news of the censoring of government-funded science organizations, chances are you’ve seen something about science in the news recently.  Much of this news is bad news for the scientific community, foretelling of impending budget cuts and restraints on environmental protections.

Why does it matter? As Neil DeGrasse Tyson says, “science requires openness to flourish”. Science has provided us with antibiotics and nutritional information to keep us healthy. It has given us the technology to build cell phones and computers that entertain us and connect our lives. If our leaders try to prevent scientists from making discoveries that don’t align with their agendas, they might prevent life-saving inventions from being made. If those scientists are forbidden from telling the public about their work, lives could be put in danger. Take, for example, the National Parks Service. When President Trump ordered organizations like the NPS and EPA to stop mentioning the climate on their web pages, he chipped away at their right to freely speak about their findings. The NPS publishes information about weather conditions – potentially life-saving information for hikers and tourists. Scientists need to be able to inform the public of new findings to keep citizens safe – and citizens need to support scientist’s efforts to discover new information about our world, even if that information contradicts what we want to believe.

So how can the average person do this? It doesn’t require going to grad school for physics, dedicating your life to research, or even going outside. You can support science by keeping an open mind to change in our world and embracing the facts about it. One of the easiest ways to start embracing science is right on your computer – watching TV series that feature science.  Images of the old-school, grainy nature documentaries you watched in elementary school might be coming to mind, but it can be much more entertaining than that. While those documentaries can be fun to watch and still present some fascinating information, newer and trendier docu-series might spark your interest a bit more. Here are three series – all available to stream – that are relevant, gorgeous to watch, and just plain fun.

This 2014 series covers everything from the history of brilliant scientists to animals to black holes. It explains concepts in a way that is easy to understand, but still entertaining. Neil DeGrasse Tyson hosts all 13 episodes and gives viewers thought-provoking ideas to mull over. If you enjoy, science fiction, movies like Interstellar, or want to learn more about various scientific concepts, check this series out.

The latest in the BBC’s line of nature documentaries, Planet Earth II is one of the most visually stunning shows ever produced. Featuring unparalleled shots of remote locations, you’ll fall in love with the beautiful animals showcased. The last episode details animals living in the urban world, and will likely make you think about your impact on the world around you a little bit more. This series is available to watch on the BBC website and to download on Amazon, and many of the other nature shows produced by the BBC are available on Netflix streaming (including the original Planet Earth and Blue Planet.) Bonus: If you fall in love with the hi-def footage of land animals, Blue Planet II will feature ocean dwellers and is due to be released in 2017.

Lastly, we come to Bill Nye “The Science Guy’s” new Netflix Original Series. Each episode features a guest that chats will host Bill Nye about topics with a focus on scientific views. He dispels myths and spreads facts – exactly what the scientific community need during a time of “alternative facts”.

However you support science – whether it’s quietly in your own mind, or loudly at a march – it is important that you are open to beneficial scientific progress. After all, we used to believe that the earth was the center of the universe, and look at how our minds grew in a beautiful way when we embraced science!

In this article:bill nye, Environment, government, policy, science, trump, tv
Up Next:

A Recap of Riverdale’s Season 1 Finale 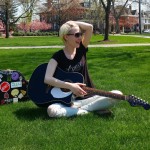 Jess is a high school senior, and loves most forms of media and the arts. She is a musician, and has written for Dormify, Her Culture, and Her Campus, among other sites. She loves punk rock, french fries, and fashion.