Hidden beneath the surface of fandoms are artists and designers. They’ve sketched and created artwork of their favorite artist and post their breathtaking works online for everyone to see. Once in a blue moon, their art gets recognized by the inspiration behind the art. The recognition promotes a feeling of overwhelming joy and happiness. It’s one thing to be showered with compliments by people in your fandom, but it’s a feeling beyond euphoria when the celebrity of the fandom actually notices you and your work. It seems to be something out of fiction to have your artist notice you and your work, right? Something like that can’t be too real. On March 22nd, that dream became a reality for a teen in Australia.

Meet Gianna Moreno, the 16 year old girl from Sydney who just designed merchandise for music sensation Shawn Mendes that is now being used for his sold out Illuminate World Tour.

After a couple of minutes of trying to get a connection, Gianna and I got to Skype and she spoke very humbly of the one in a million opportunity that she got the honor of receiving. Speaking with Gianna made me feel like I was talking with a friend who I had lost touch with, even though not once did we exchange words before the interview. Moreno is incredibly sweet and humble – even happily agreeing to the interview while it was half past midnight in her time zone. She is incredibly talented and I couldn’t be more than proud that she got the chance to work for her idol on this tour.

How long have you been a fan of Shawn and what drew you into the fandom?

I was drawn into the fandom when it was the whole MagCon thing, so I was part of that. What drew me in was I remember seeing videos of Matt, Nash, all of them together and I’d see Shawn and then I found his Vine and that’s how I found him – through MagCon and Vine.

How long have you been designing for? Was it a hobby that you picked up?

Yeah, I’ve been designing for and making, like, little clothes for as long as I can remember. I have books from when I was like, five, with little drawings of clothes and stuff, so that’s literally the only thing I’ve ever wanted to do. So it’s really cool how this all happened.

A lot of the fandom truly did love your merchandise. Do you think that if you had created something else, you would have gotten a different reaction?

Honestly, maybe. Because I think why this got so big was it was directed to this fandom. So I think that’s why it blew up. So maybe if I made another design, it probably wouldn’t have gotten that much recognition because it’s not the target audience for the followers and stuff. So yeah, maybe.

It seems like it’s every fans dream to be recognized by their idol, let alone to be offered to, ya know, “Hey, I’d love to have your merchandise on my tour.” So what was that feeling like when you found out that Shawn and his team actually saw your merchandise?

It truly was one of the most surreal moments of my life. I vividly remember the first time it received recognition from him. When DML [DailyMendesLife on twitter] created a tweet which had Geoff [a member of Mendes’ team,] Andrew [Mendes’ manager,] and Shawn tag in it so they could see my designs. Shawn liked that tweet, and that, to me, was the start of everything. It was the first time Shawn recognized anything I did, so that moment there was incredible. He saw the designs and that was all I wanted; I was completely filled with joy and happiness! A few days later, I didn’t receive a direct message or anything, so in my head I thought, maybe he liked it and wasn’t able to use it. And I was completely okay with that. Little did I know that on March 22nd, I was about to receive the best news of my life; that night I was emailing Shawn’s team for the last time, as I tried to contact them before and was unable to get a response. As soon as I was about to press send on an email, Shawn himself had followed me on Twitter and send me a direct message. Shock was the initial feeling. I was speechless and overwhelmed, I had absolutely no idea what to do! The first thing I did was I ran to my mum to show her, at this point everything felt surreal. My heart was racing and my adrenaline was so high. To think that Shawn wanted to use my designs was so insane! I still don’t believe it. I felt like the happiest girl alive! It was the best moment of my life, a dream turning into a reality – a feeling I’ll never forget.

“Roses” shirt inspired by track 15 on “Illuminate” has been selling out within minutes at arenas.

Well I truly believe that you deserve it! That’s a wonderful thing to happen!

Aw, thanks so much, you’re so kind.

You said this was a secret that you had to keep. What was it like keeping this a secret from your friends?

Horrible! [Laughs.] It sucked so bad! The first email Andrew sent me, the first line was Please keep this private and confidential. And I remember staring at that. I told my really, really close friends in real life and probably the smaller amount on Twitter, but that’s it. But I remember people would tweet me and be, “Oh, I wish Shawn would tweet you and use your designs.” And throughout this whole thing, it was killing me inside.

Little did they know…

I’m so speechless. Knowing that it’s someone from the fandom who is doing this. And I’m so happy that it’s you because you’re such a sweet and humble person and your designs are so beautiful.

Thank you so much. That’s so sweet.

What made you want to design his merchandise? Was it because people weren’t really big fans of his previous merchandise?

Yeah, so, I remember actually last year, Troye Sivan did this competition on fan merchandise, he was going to choose fan made merch and I entered that contest, but I didn’t win that one. [Chuckles.] And then I saw some tweets, “Shawn needs new merchandise,” and I was like, oh. I was just doing some sketches as well and I thought, why not think of a design just for fun for him? And I remember I started drawing the [Adelaide] street sign, it was the first thing because I was listening to “Honest.” And that same lyric, “Can you meet me down on Adelaide Street?” It was stuck in my head, so I remember down the Adelaide street sign first and his tattoo, the Toronto skyline was the inspiration for that as well. My motto for that was I love to design, I did that for fun. I thought it would just be cool for everyone to see the designs.

The Adelaide Street design is now being sold as a hoodie on the tour.

Had Shawn not seen your designs, do you think you would have created more or just given up?

Out of all the designs, which was your favorite one to do?

The Adelaide Street – that was my favorite.

Were most of the designs inspired by certain songs or the whole album in general?

What was that actually like getting to talk to Shawn and for him to ask to use your designs on the tour? What was that feeling like?

Oh, it was the best feeling in the world! [Note: I could hear her smiling through the line.] It sounds so cheesy, it felt like an actual dream come true. Because it’s something I would just talk about for fun. Like, “oh imagine is he did that,” and it’s so funny. I literally did not expect him to DM me at all, so I was shocked, I was shook. Like it didn’t happen, it’s not real. I kept refreshing and clicking on it to make sure it was his account and it was really him. It’s just a giddy feeling, I don’t know, it’s so weird.

A lot of people have been sending you pictures of your merchandise being completely sold out on the tour! How does it feel knowing that you have something selling out in minutes?

Oh, it’s so crazy! I remember the first person who tweeted me wearing the Roses shirt, it was a guy and I remember freaking out! Something I made in my bedroom is in Europe in Glasgow, it’s all over. It was just so crazy and I was so happy because my designs were literally just on a screen and now to see it in real life and people wearing it was just the best feeling in the world!

If Shawn saw this article, what would you like to saw to him?

[Chuckling.] Way too much! I’d say thank you so much for everything, I appreciate not only him, but his team, and Andrew and everyone who has helped me get the designs out there. And I want him to keep inspiring people to do what they love because without his music I wouldn’t have made these designs and I wouldn’t have been here today. And also I love you so much!

There’s a lot of people who have started to create their own versions of Illuminate designs and I think it’s because mainly you’ve inspired them to do so. Knowing you’ve inspired people, what does that also feel like?

That feels so cool. I remember I inspired someone to draw a tattoo kind of thing. And I thought, wow, that’s crazy! It makes me feel really happy. It’s actually a really good felling.

What advice would you give someone who wants to create merchandise for not only the fandom that they’re in, but also professionally?

I’d say be original. Get inspiration from other things, but being original and having a design that’s unique gets so much attention. Being unique really gets people looking and seeing the rest of their designs. Also, social media is such a good platform to get your designs out there. And keep doing what you love no matter what people say. Even if you get hate. Honestly, just brush it off and keep making designs, it’s what you love, so keep continuing to do it.

For Gianna, her dream became a reality. She got to work with her idol, Shawn Mendes. Her designs that she did out of fun are now selling out in mere minutes at every single show, and there’s talks of putting them on Mendes’ official website due to popular demand. For you out there reading this, this too can become your reality. In Gianna’s words, “Keep doing what you love no matter what people say.”

In this article:art, graphic design, Shawn Mendes
Up Next: 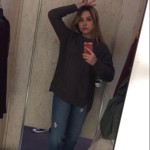