Sienna Mae Gomez’s rise to fame emulated most modern-day social media stars’ stories of viral success. She had a quirky attribute that hit home for many and seemingly spread body positivity, making her seem relatable and vulnerable to the masses. She gained her fame from proudly displaying her stomach rolls, often unbuttoning her pants and shamelessly dancing in her famous Tik Toks.

However, her online persona made a quick transition from the sweet, uplifting girl next door with a high school sweetheart to a ruthless, superficial sexual predator overnight.

Gomez’s internet-famous boyfriend, Jack Wright, better known for his dance videos featuring his twin, was outed as a victim of sexual assault on Twitter. A statement made by Wright’s childhood best friend, which was also supported by his brother, claimed Gomez had assaulted Jack and often created toxicity in their relationship prior to the event.

the sienna mae & jack situation is exactly why most male SA victims are afraid to speak up. one video from sienna and y’all were quick to jump to sienna’s defense and discredit jack. i hate that a video had to be released in order for people to believe him.

As we saw in the #MeToo movement, many celebrities would immediately apologize, whether it was constructed carefully by a PR team or hastily written on the Notes app. Gomez took a different approach, though. Instead of apologizing for her alleged actions or taking accountability for the discomfort she created, she “unequivocally” disputed the claims in a YouTube video.

Gomez deemed the claims to be lies, which she would be disputing with her legal team and the plethora of evidence she claimed to have. And for a brief twenty-four hour period, the internet believed her. Neither side had solid evidence yet, but the facts were: there were countless videos of Wright showing discomfort and videos where Gomez bragged about the brothers cutting contact with her. Reasonable suspicion fell on Gomez, even after her video rebuttal. It was only fair in the situation to at least stay neutral, because even though neither side had disproven the other, there was an aura of guilt surrounding Gomez.

But the following day, the neutrality turned to guilt. A series of graphic videos were released of Wright unconscious during a party, passed out on a couch. Following a clip of Wright unresponsive, Gomez was seen straddling him and making further nonconsensual advances. His hand can be seen falling limply off the shoulder of a friend, displaying his inability to consent or react in the moment. What’s worse than the victim being forced to have his experience seen by the entire world and relived with every view is the fact that Gomez so adamantly refused the claim and manipulated viewers into viewing her as the victim.

It took having his assault broadcasted for the world to see to be believed. Even in this day and age of unspoken feminism and demanded justice, male sexual assault victims receive some of the cruelest treatment.

His Struggle is Every Male Victim’s Struggle

Female victims struggle to be believed every day, that’s without a doubt. However, under most circumstances, it can be easier for people to believe them, or at least understand how they could be telling the truth. Women, in society, are viewed as small and fragile—defenseless. People understand how a girl could be telling the truth. Men, on the other hand, are seen as strong and capable. Society thinks they are big enough to defend themselves from falling victims and they don’t understand how they possibly could be assaulted. People ask men, “so you couldn’t just push her off?” They tell men, “you should have a higher alcohol tolerance being your size, there’s no way you were unconscious.”

Yet we could see Jack Wright’s head tilted back and eyes closed, completely passed out. He is, by society’s standards, strong enough not to be a victim. But no one is immune from others taking advantage of us. No one is immune from vulnerability, especially when it comes to drinking. Tall or short, petite or heavy, you will be affected by alcohol eventually. And when you are, to Wright’s extent, you cannot consent. There is no denying that he couldn’t consent, as well as the fact that Gomez had a more dominant power complex, which is unheard of in society’s view of male assault.

If it were flipped, with Gomez hypothetically accusing Wright of assaulting her, I guarantee that releasing the video of the assault wouldn’t have been necessary. And that’s the sad truth when it comes to the concept of “believe the victim first” that has developed in the last couple of years. It seldom applies to male victims.

And to an extent, it makes sense why, because it began to override “innocent until proven guilty” starting in the MeToo movement when a majority of victims were female. Everyone was focusing on female victims and were more prone to believe them due to the context and actions of famous male assaulters. However, male victims are still living in the pre-MeToo era. They were never believed first, unless they were being believed to be assaulters.

Men still require strong evidence to prove their status as a victim. And what is this ‘strong evidence?’ Well, in his case, it’s a video of himself getting assaulted. How is it fair?

With our demands for justice and accountability for sexual assault victims, we continue to exclude and fail male victims.

This is why men don’t come forward about sexual assault pic.twitter.com/t4ddlMeq9a

How Can We Heal These Men?

For the last year of Wright’s life, he has been constantly attached to Gomez’s image and online personality—his assaulter. Their videos and photos are plastered all over the internet and will be forever linked. Her accounts have millions of followers and her videos pop up on the TikTok ‘For You Page’ constantly. Videos of him being assaulted and taken advantage of are circulating on every platform as we speak.

How will he be able to go forward with his life, at least temporarily? This scandal was drawn out and exerted him more than it did Gomez. The burden fell on him as the victim due to the failure of the “believe the victim first” system.

If men like Wright ever can receive justice and peace, we cannot let that system keep failing them. Instead of requiring hard evidence for men, while believing women without a shred of evidence, we need to change the way we assess instances of sexual injustice. Because right now, it’s sounding less like believe the victim first and more like believe the woman first.

Thankfully for Wright, he has had a platform to speak out on his experience and has unfortunately become an example for the treatment all male victims. 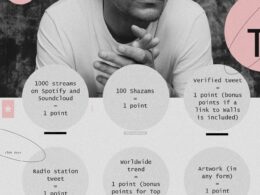