The Supergirl Cast Just Disrespected Their LGBTQ+ Fans at SDCC

The CW’s Supergirl is a TV show that rose to success and headlines predominantly because of its LGBTQ+ fan base. Members of the community, especially ones of the targeted younger audience, were thrilled to see themselves represented in a healthy way. Sanvers — characters Alex Danvers (Chyler Leigh) and Maggie Sawyer (Floriana Lima) — is one of the core couples of the series and gathered abundant praise. However, there is another ship that young women-loving-women and other LGBTQ+ fans have flocked to — Supercorp. Lena Luthor (Katie Mcgrath) and Kara Danvers (Melissa Benoist) are not an official couple, but their scenes together suggesting a possible mutual desire raised some eyebrows and of course, earned them fans.

The cast is aware of this, they’re aware of the spike in views they get because of these couples, they know LGBTQ+ fans are starved of representation — and yet, on July 22, 2017, at San Diego Comic Con, they managed to royally screw it up.

Things started on an initially innocent note when Jeremy Jordan, who plays Winn on Supergirl, started singing to a beat made by other cast members in the room, including Katie Mcgrath and Melissa Benoist (the actresses who make Supercorp). He starts on about the Supercorp meeting, but then starts angrily shouting into the camera:

i don't even ship supercorp but this is legitimately the rudest thing ive ever seen. i. gn
https://t.co/ATVjAfLJeu

His fellow cast members laugh in the background, however, LGBTQ+ fans were not at all happy.

Dana Piccoli says it best in her series of tweets. Here are a few.

I'm genuinely disturbed by it. In my 6 years of covering tv, I've never seen a cast actually take glee in making fun of a segment of fandom

I know they think they were just having a laugh, but a large portion of SG's fandom is queer, and to be so dismissive and glib…im shocked

Katie Mcgrath who’s character Lena Luthor is 1/2 of Supercorp has visibly been supportive of the ship’s fans in the past.

Although she did laugh along at SDCC, Mcgrath appeared to be uncomfortable.

And instead of making it better, Jeremy Jordan makes it worse. He later says “I just destroyed Supercorp.” Melissa follows up with “It was brave.” Unbelievable, right? But here’s the video to prove it.

Some may argue, they’re right, they are just friends! Stop making such a big deal! But just because two female characters are just friends and the ship is not official does not mean it is okay to invalidate it and make the whole fanbase sound delusional. The dialogue delivered about Supercorp was very offensive to hundreds, if not thousands of fans everywhere (just look at the retweets of the tweets shown).

Floriana Lima who plays the lesbian character Maggie Sawyer (1/2 of Sanvers) was officially confirmed as recurring a while back, but at SDCC the following statement was released.

“Floriana is not able to return for the full season. […] We have an amazing, beautiful story to tell in her remaining episodes that is emotional, and modern, and really honors the love between these two women. And she is always welcome to come back to the show whenever she’s available. We love Maggie, we love Sanvers, and we’re devoted to them forever. – Jessica Queller, SDCC 2017

So, what does this mean for newly engaged Sanvers? There are numerous possibilities and rumors circulating around the fandom, like Lima’s character dying, breaking up with her fiancée, or even her leaving to attend to her child that has not (yet?) been introduced in the show but has in the comics. The most probable outcome is that the relationship will continue, but only off-screen. Meaning that Supergirl’s fan bases for these two ships will dwindle away.

Considering that the show rose to the fame it has acquired now because of Sanvers and Supercorp, what does this leave them with? Some say cancellation.

Author
Catherine Horkay
Cat is a 5'0 senior in high school with dreams that reside much higher than her height. Her passions include academia, berry smoothies, and LGBTQ+ rights. (IG/TWIT: @catnipscarlet) 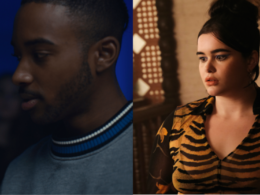